There is no recipe for staying alive with advanced, recurrent cancer – and ovarian cancer by definition tends to be advanced and recurrent. Alas. Luck seems to be the only constant in outliving the odds. My luck hasn’t seemed great of late as my first recurrence has involved a year of running through various chemos until low dose taxol brought me enough shrinkage and stability to start Phase One of a clinical trial at the University of Pennsylvania. I now travel cross the USA for treatment every two and a half weeks. Is it crazy to still feel so alive?

Why not feel alive?

I completed my fifth trek to Philly and second round of treatment this past week. Outside of the city being beastly hot, there are no riveting ups or downs to report. The thunderstorms that shut down all flights just as my plane backed onto the runway sucked but that is Mother Nature and my poor relationship with the gods of travel stepping in again. For an Oregonian, though, this new constant of daily thunderstorms most afternoons is its own form of excitement – Western Oregon averaging a mere three thunderstorms a year.

The routine is becoming just that. My sister, an emergency room doc and 18-year survivor of stage 1 ovarian cancer, travelled in to greet me. She is the big sister despite her smaller frame – 18 months my elder. Living far away with her own life of demands, our rendezvous in Philly allowed her to treat me to a vacation while holding my hand, at times literally, during treatments. As someone inclined to do it all solo, it was a lovely treat. Especially the finger to squeeze and the voice to soothe as the two vaccines to the groin searched out deeper lymph nodes to inject this time. 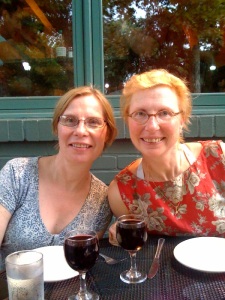 Vacation meant strolls and delightful meals out in Philly, the city beyond hospitals.

A sister meant no luggage to schlep. A sister meant all needs all the time were met. A sister meant no need to explain or entertain, we could just be. My prescription for nausea was filled while I stayed being infused. Lovely. Although that did mean I navigated the fire alarm alone. The alarm droned, “this is not a drill” with flashing blue lights, while failing to say what you do when it is not a drill. Everyone in the ward was tied to toxic chemicals. It is a large building. The answer seemed to be for the staff to close you in your single room. Such solitary confinement never goes over well with this gal assigned a windowless chamber. So I left, found a lounge window ledge to sit on, infusion equipment in tow, and watched the fire trucks arrive. My last treatment overlapped with the collapse of a downtown building and the 12 survivors being brought to this center. I am getting used to the secondary dramas unfolding in a large urban hospital.

My ‘vacation visit’ with my sister was over too soon. I don’t know how to survive recurrent ovarian cancer but I do know enjoying the moments probably does not hurt. Hopefully, getting into one of the most exciting clinical trials of the times will help as well. Stay tuned!