Have you been swept up in the recent brouhahas debating how dying people should close out their lives – loudly versus quietly? Two doomed women have triggered voluble discussion in their separate determinations to live longer. They share being younger and skilled in amplifying their voice. Being loud has been a part of their strategy. They enjoyed full lives before and during their years with terminal cancer. One has since died, the other struggles mightily in a hospital.

The discussion has not been amongst the dying but rather largely amongst those still living lives of good health. Frankly, columnists needing to find a topic launched much of this with plain poor manners.

Andrea Sloan, typical of many advanced ovarian cancer patients, had no more FDA approved drugs to contain her cancer when her doctor indicated she was a molecular match for a new drug still in clinical trail. She couldn’t access the clinical trial so she organized a team, Andi’s Army, to petition the drug company via public outcry to grant ‘compassionate use’ of the drug. It was denied and she died within four months of her campaign start.

Lisa Adams suggests no policy changes I know of, she just tweets and blogs her experiences as a lab rat for her cancer, saying yes to whatever seems plausible to keep her alive longer with her young family. She has quite a following indicating appeal. 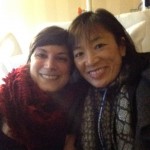 Lisa (left) in the hospital with her doc

I am also rather loud in my living with cancer just as I was rather loud in my pre-cancer life. Whether astrologically flawed as an Aries or for some other reason, I share my reality and am persistent in my medical options. It is not wrong or right.

I watch another cancer sister move into the end zone with her disease. She is as contained as ever. She suffers quite a bit and understands there is no turning around where her cancer is heading. She is actively dying despite still being in treatment. Why, I wonder, have none of my local sisters chosen Death with Dignity, legal in Oregon. But I wonder to better inform my own choices not in judgment. When in my own dying process, let alone how, will I finally let go? Physical pain can be more tolerable than saying that final goodbye, I suspect. I think the terminally ill have few judgments about how to die, we are busy enough keeping our heads above water. Watch us or not but don’t judge.

There is a story about the Buddha being approached for counsel on the best way to handle news of one’s own approaching death. Buddha, apparently, began to flail around in deep, loud, uncomfortable hysteria for several long minutes. Observers had no idea what was happening. Just as suddenly Buddha sat back up, done with the outburst, and said, “There is no right way to die.”

I awoke this morning to an hour of Martin Luther King, Jr’s voice. His speeches are always humbling and inspiring. The hour closed with his final speech before being assassinated. In it he referred to being stabbed in the chest and the knife missing his aorta by the merest of slivers. Doctor’s noted, and the press repeated, that if he had sneezed prior to surgery the knife would have shifted enough to kill him. A little girl wrote in his favorite letter, “I am glad you didn’t sneeze.” May we all avoid a fatal sneeze today and feel gratitude for the choices we are allowed. 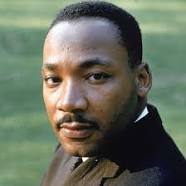